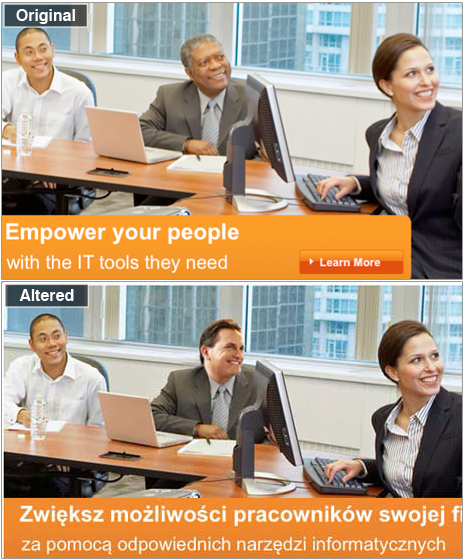 So in my last post , I mentioned the fact that Microsoft switched out a picture of a black guy for one with a white guy in its Polish print ad.

I don’t really get the big deal. Poland’s black population is vanishingly small. “Black” doesn’t even get listed as one of the items in “Ethnic Groups” on the CIA Factbook page for Poland. (The US has 12.85%.)

So why not take out the black guy?

To put this a different way, let’s say the original picture was of a bunch of white guys in Finland. Then they decided to sell it to a US market, so they popped in people of differing descents to mix it up a bit. Is that bad?

The issue is one of taste, maybe. I mean, take a new picture just to avoid looking amateurish. But I don’t see any racism here.

Note: Some people say that they left in the Asian guy ’cause Asians are supposed to be smart. I don’t know. Seems more likely that they just took out the least white person. Plus, he’s right in the middle of the pic.

BBC Pretends to Have No Sense of Humor
Google Books is So Good. But Imperfect